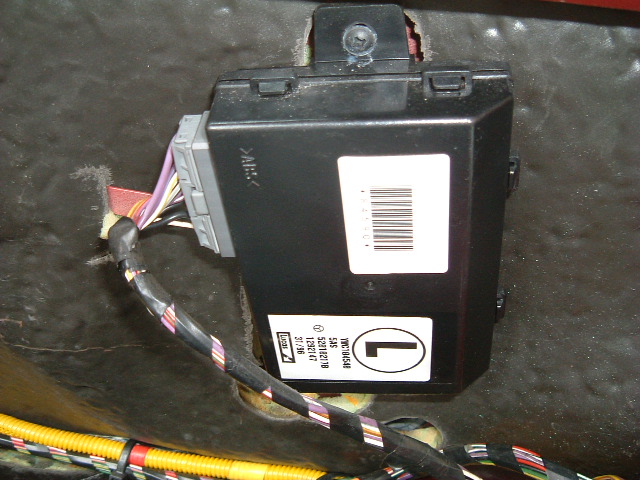 The 1997-2000 Rover Minis have a factory installed alarm/immobilizer system that is difficult to service, especially if you live in the United States. This is because Rover no longer exists and the ’97-’00 Rover Minis were not exported to the US. If you lose your remote key “fob”, you cannot start the car… EVER. This is what I was told by a very respected Mini expert. However, I learned there are solutions if you lose your fob or otherwise destroy the fob (eg. dropping it in the pool is a favorite one).  I’ve spent many hours researching the solutions and what you will read in the following paragraphs is the summary of that research. Please contact me if you have more information or corrections!

If you own a Rover Mini, please join the Rover Mini Owners Group on Facebook Most, if not all, of the Rover Minis of this era are equipped with the Lucas 5AS alarm / immobilizer system. Most common “fobs” (the plastic remote for your keychain) are the 2-button 3TXB, 3TXC, and 3TXA fobs by Lucas. Note however, that the 3TXA fobs will not work with the later versions of the 5AS (saw it mentioned on a forum posting; have not verified personally). So, I would stay away from the 3TXA fobs as candidate spares unless you feel adventurous. My Rover Mini came with a 3TXB. Moreover, there’s the Lucas 17TN fob that is commonly found on places like eBay and this 17TN fob reportedly works with the 5AS unit. I have tried it myself and the 17TN does indeed work. Note, common spelling is “immobiliser” in the UK. In case, you are doing any searches. What can you do if you lose (or destroy) your fob? What if you have only one fob and want the security of a backup fob? I have found these options:

Before we go into the details of each option, some Q&A: What do you mean by program the 5AS to “accept one or more fobs”? It is the 5AS unit (in the dash) that is “programmed”, not the fob. I know, it seems counter-intuitive, but remember that the 5AS is the intelligent device and the fob is the small dumb device.  The fob just has a hard-coded serial number. Each fob is unique.  So what you do when you program the 5AS is you put the 5AS in “learn” mode and tell it which fobs are kosher by pressing the fob buttons while in learn-mode. After exiting learn-mode, the 5AS will ignore all fobs except the ones you told it to accept while in learn-mode. The fobs themselves are never “programmed”. Where is the 5AS unit in the Rover Mini? In the dash near the radio. You usually have to remove your radio to get at it. How to identify your immobilizer unit [archived version]. When I removed my 5AS unit, I removed the radio and the DIN sleeve holding the radio. The 5AS in the Rover Mini is mounted vertically such that there is an upper screw and a lower screw. With the DIN sleeve removed I used a Bend-A-Light flashlight to get a good view of the two screws. Then, I used an 8-inch long #2 phillips screwdriver to remove the two screws. You need a long screwdriver to reach the top screw (it also helps to have a long screwdriver for the lower screw).  I’m happy to help any Mini owners with removing and installing their 5AS.

How many fobs will the 5AS accept? Up to four (4) fobs can be used with the 5AS. How many other Rover cars used the 5AS? Quite a few apparently. Immobilizers were a big fad in the UK and other parts of Europe in the 90s because cars were getting stolen and never seen again (probably moved to other countries, eg. central Europe). Rover made several cars during this time and many were equipped with the Lucas 5AS (or similar) units. The other cars were Rover 100, 200, 25, 400, 45, Metro, MG, MGF. This is a lucky thing for us Mini owners as immobilizer “locksmiths” were needed after Rover went away. How good is the 5AS security? Can it be bypassed in other ways? The security is pretty strong: it uses a rolling code system where the code changes everytime the fob button is pressed. Good luck coming up with your own bypass technique. To give you an idea how difficult it is to resolve an unresponsive immobilizer problem, I’ll tell you the story that Don at MiniMania told me: When BMW was preparing to launch their new MINI Cooper in the States, they got hold of a Classic Mini for part of the marketing event. It had the immobilizer system and the main ECU blew up. They contacted Don and got a new ECU. They installed the new ECU, but of course the car would not start because the new ECU was not “mated” with the old immobilizer system. BMW tried everything to get the car to start. Then they used their insider connections to reach people who worked for Rover. Eventually, they found some expert who could help them and somehow got that person to either bypass the immobilizer or sync the ECU to the immobilizer (I bet it was the latter: syncing). Bottom line, have a backup plan NOW for when you misplace your fob! Update 2012/04/19: I have just learned from the folks at remobilise.co.uk that there is now a way to marry together the ECU with *any* 5AS.  This is great news because now it means you can repair your car even if your original 5AS dies. Option 1 details: Some shops in the UK (aka immobilizer locksmiths) who work on the 5AS sell a small programming “pod” that simply plugs into the diagnostics port of your Mini and puts the 5AS in “learn” mode. Following some simple instructions, you assign your fobs to the 5AS and exit “learn” mode and.. voila! the 5AS is programmed and fobs are ready to rock. Some notes: I’ve been very happy with the service from David at alarmremotes.co.uk who sells this programming pod (called the “ROV2”). You put down a deposit that is refunded to you after you return the used-up pod to him. David includes a better, more durable fob too (called the MT2). The MT2 fob has a unique key code that can be used to order an exact replacement fob. This is an excellent feature because it means you won’t have to reprogram the 5AS when you lose the MT2 fob. A clone can be shipped to you based on the key code. tech-tronics.net sells the programming pod too (called the RPD, Rover Programming Device) and they don’t need the pod itself returned to them.  If you discover how these pods are made, please let me know and I will share with the Rover Mini owners group. NOTE: The pod did not work with my Rover Mini (I tried two different pods, one pod was definitely good because it was used by David on a car immediately before mine). Seems that the wiring between my diag socket and the 5AS was altered previous to my ownership of the car. It’s possible that this happened when the radio was installed (I don’t have the stock radio). Option 2 details: For this, you de-install your 5AS unit and send it to a shop to have it programmed with fobs. You send any good fobs you already have too. Of course, the downside is that you won’t be able to drive while the 5AS is out. One advantage of this option is you may have more choice of vendors and therefore an opportunity to get a lower price. One person who is liked on the MG-Rover forum is Lates at lates600.com . Another shop is remotekey.co.uk Because the pod didn’t work for me, I had to do Option 2. I now have three operational fobs: the original 3TXB, a 17TN purchased off eBay, and an MT2 fob from David. Primarily, I use the MT2 fob because it’s thinner and I can easily replace it if I lose it (see MT2 info above). Option 3 details: Here, you remove the dependency on the immobilizer completely. Basically, you de-install the 5AS and send it to a locksmith (in the UK, of course) who installs a bypass circuit board inside your 5AS. This is a permanent bypass, so don’t count on your 5AS ever going back to normal immobilizer mode again. alarmremotes.co.uk can do this work, as well as one other place I found (forgot the name). While it sounded great to me at first, one potential downside to this option is what happens if the bypass circuit board fails? You’ll need to find, buy, and install a replacement bypass board. If this happens 5-10 years from now, will these bypass boards still be available? I might buy a spare board and keep it in a safe place. The bypass board works by sending a secure code to the Mini’s main ECU at ignition time. The code is the same code that comes from your 5AS when an authenticated fob turns off immobilization (disables the immobilizer). So, the bypass board tricks your ECU: it always tells the ECU that immobilization is off. No fobs are needed. The 5AS and ECU are “mated” to each other when they are installed. If you change either the ECU or the 5AS, the ECU will have to learn the secret code of the 5AS. This is done by a locksmith. And yes, you’ll have to send both the ECU and the 5AS to them. Note: There are two “ECUs” often discussed. The main engine ECU and the 5AS immobilizer ECU. I avoid calling the 5AS an “ECU” to avoid confusion. Other sites call the 5AS the “alarm ECU”. Covering All Your Bases If you really want to cover all your bases, you could do a combination of Option 1 and Option 3. Basically, you would program 4 fobs today and keep the spares in safe places (uh, one in a safe deposit box?!). Then buy an additional programming pod and keep it unused in a safe place (in case you need to reprogram in the future and the pods are hard to find). THEN, you would also buy the bypass board and keep that in a safe place in case you ever need it (perhaps your 5AS dies one day). That would be the ultimate plan for the most paranoid, haha. And remember, if you ever sell your Rover Mini, these measures will be useful to the new owner.   Note, if your 5AS doesn’t respond to your fob, the fix may be simple (don’t assume that programming is needed):

Most of the systems run on 433MHz (433.92 to be exact). If you buy used fobs, they may be on a different frequency. So just be aware. In fact, yours might not be on 433MHz. How to check the frequency of a fob [archived version]. I figured out how to check the frequency of a 17TN fob. Open it. On the PCB, there’s a chip labelled “EPCOS” (name of the company). If below the word “EPCOS” you have the number “2701”, then the fob is 433.92 MHz.  This is the Epcos R2701 resonator and you can find the datasheet by doing a google search for “epcos 2701”. Some shops sell fob refurb kits to “refresh” your fob. They often contain new rubber buttons and other bits. I find used fobs in decent condition on eBay, so I haven’t had to go this route. How to change the fob battery:

Forums that I used for research: mg-rover.org theminiforum.co.uk Shops that I mention: alarmremotes.co.uk tech-tronics.net lates600.com remotekey.co.uk remobilise.co.uk If you own a Rover Mini, please join the Rover Mini Owners Group on Facebook Copyright 2007 and onwards by Donald C. Lee This information is offered without warranty or guarantee of its accuracy. Use at own risk.